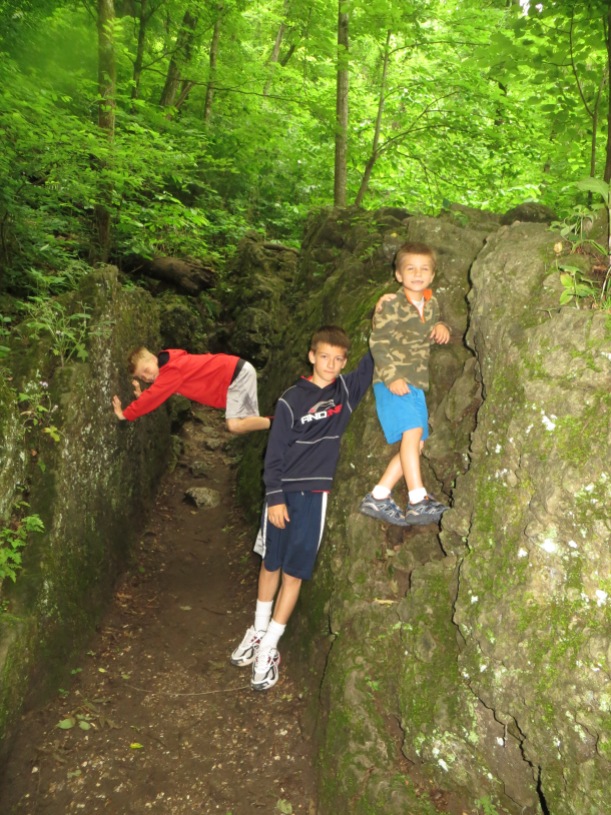 I love it that I am blessed with the opportunity to write for Today’s Christian Woman. Sometimes I can’t believe I get to write my heart, and get paid to do it 🙂 However, every time I write a parenting article, this little voice inside my head says, “Your kids haven’t grown up yet. You still have plenty of time to screw them up.” I silence it with prayer, and the knowledge that God is in control, and I am not.

Here’s the start of the story. To read it in its entirety, just click the link at the bottom.

Uncomfortable is a common state of being for me. I had newlywed dreams of rearing happy, calm little kids. They would play with blocks, color pictures, and maybe jump on the bed now and then. But they wouldn’t do things that made me wince.

Then I had boys. Three of them. I don’t think I deserve a trophy for birthing three male children, but I do think those of us moms who have successfully held our tongues while watching our daring man-children dangle precariously from tree branches have at least earned a box of chocolates.

I have learned the art of silently screaming in my head, Stop that before you break every bone in your body, while verbally saying, “Wow, buddy, you are the bravest boy I know.”

I want my kids to be safe. I don’t like emergency room trips. Stitches, staples, casts . . . none of those things bring me joy. But they come with the territory, and I have come to grips with that. The longer I live in this crazy world whose goal seems to be to tame the wildness out of boys, the more I want to encourage the wildness to thrive in mine. (Even if the stress of it shaves a couple years off my life.)

Strong and Courageous Men of the Bible

The Bible is full of courageous men who battle for what is right—men who are called by God to be strong and courageous in the face of some scary enemies. Moses stood up to Pharaoh (Exodus 3–12). David fought Goliath (1 Samuel 17). Nehemiah and his men completed the wall with tools in one hand and weapons in the other (Nehemiah 4). And then of course, there is Joshua.

Sometimes I wonder what Joshua’s mom was like. She’s not mentioned in the Bible, but I know there was a woman who carried him for nine months, birthed him, and likely watched him play in the sand and catch desert snakes.

I am taking some creative license, but I have a feeling Joshua’s mom took parenting seriously. She knew for her boy to grow to be the man God created him to be she must be a supportive guide in that development—even if that meant allowing him some freedoms that made her uncomfortable.

My children may not lead such eventful adult lives as Joshua or those other men, but just the same, I want to use my role as mother to direct them down the road of the courageous and strong. I fear that beating down every semi-dangerous idea they come up with will send them in the wrong direction….